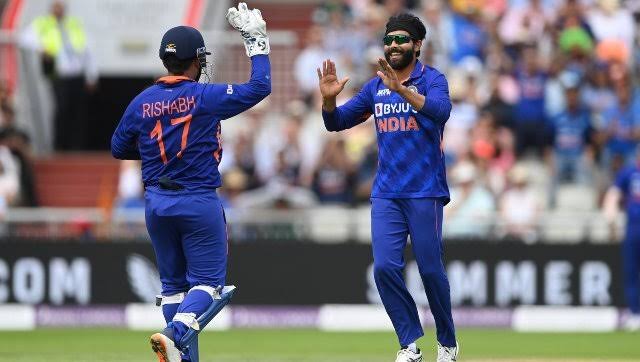 Without Ravindra Jadeja, India's Asia Cup campaign is just going to get more difficult and difficult.
India lost their opening match of the ongoing Asia Cup 2022 on Sunday, falling to Pakistan in a nail-biting Super 4 match at the Dubai International Stadium.
For the second time in Asia Cup 2022, the final over determined the result of an India-Pakistan match. However, Pakistan, who was chasing 182, came out on top this time, defeating India by five wickets with one ball remaining.
It was Team India all-rounder Ravindra Jadeja who was sorely missed in a game where fortunes changed drastically. For the uninitiated, Jadeja's knee injury has prevented him from competing in the 2022 Asia Cup. Despite the fact that Team India has substituted Axar Patel, who is arguably "like-for-like," Jadeja's abilities as an all-rounder are unmatched.
In all three of his contributions—bowling, batting, and fielding—Jadeja, who was a member of India's playing XI for their Asia Cup opener against Pakistan, was a major factor in the Men in Blue's victory over their bitter rivals. Without him, Rohit Sharma's team was unable to achieve the same outcome against the same team.
Jadeja and Ravichandran Ashwin appeared to be permanently dropped from India's limited-overs team not long ago. That's no longer the case, though. In fact, without the three-dimensional player, who not only enhances the club's middle order with his significantly increased batting abilities, but also gives the team the flexibility to use an extra bowler, the side already appears unbalanced. And whether it was a coincidence or just poor luck, India needed a player with exactly the same qualities to defeat Pakistan once more on Sunday, but no one was up to the task.
Since Jadeja, 33, who also happens to be India's leading wicket-taker at the Asia Cup, is absent, it has become abundantly clear that the stability and confidence he brings to the team is unmatched. Without him, India's Asia Cup campaign will only grow difficult and difficult.
After India's defeat to Pakistan, captain Rohit Sharma publicly acknowledged that losing wickets of Rishabh Pant and Hardik Pandya in short succession was not what the team needed at that point in the game.
After India's defeat to Pakistan, captain Rohit Sharma publicly acknowledged that losing wickets of Rishabh Pant and Hardik Pandya in short succession was not what the team needed at that point in the game.
When India came to bat in the middle overs, Pant and Pandya fell in a space of six balls in an attempt to make a big impact. If it weren't for Virat Kohli's 60 off 44 balls, which helped the team post a difficult target, India could have been in serious trouble.
While Rohit commented on Hardik and Pant's dismissal, it doesn't take a genius to realize that the India captain was subtly suggesting that the loss of the reigning champions was sparked by Jadeja's absence from the middle order.
In a knock of 60 off 44 balls against Pakistan, Kohli smashed four fours and a six. Unfortunately, the former captain of India didn't receive much assistance as those around him failed to go big, forcing Kohli to hold off on applying the brakes and instead go deep for India to post a respectable 181/7, which wasn't enough to prevent Pakistan from winning by a thrilling five wickets.
Kohli admitted the same fact during the post-match conference when he said, Today, I made a conscious effort to strike more quickly in the game on Sunday. We communicated as we lost wickets, and when our plans changed, I had to bat with Hooda till the 18th. I would have maintained the same speed and attempted to hit more boundaries or sixes if there had been more batters. But once more, I found myself in a predicament that required me to dig deep.
Again, if one were to read between the lines, it wouldn't be difficult to understand Kohli's statement, which alludes to Jadeja's absence as he is the type of player who can play in time with his partner and give them the freedom to express themselves. Jadeja proved his versatility by forming a pivotal partnership with Pandya during India's opening match in the tournament against Babar Azam's team, which ultimately led to the Men in Blue's victory. Jadeja can play aggressively from the start or smartly and collaboratively in partnerships.
So, Deepak Hooda was selected for the playing XI for the match against Pakistan, but he didn't bowl a single over, which left India without the option of a proper sixth bowler who can pick off opponents at critical moments to change the tide. Again, Jadeja is someone who is ideal for that position. There's a good reason he's known as "the man with a golden arm." Jadeja has the capacity to bottle one end up and practically hurry through his overs, even when he isn't getting wickets.
India faces a serious dilemma moving forward in the competition since, without Jadeja, they could either play Axar Patel, whose bowling abilities are remarkable but whose batting abilities, despite recent good performances, cannot be matched to those of Jadeja. Otherwise, India could turn to Rishabh Pant, who is once again not a sure thing after falling short of management's and fans' expectations during the match against Pakistan.
Another alternative is Deepak Hooda, but he can only be relied upon with the bat and cannot be trusted with the ball.
And when it comes to fielding, no Indian player is as deadly as Jadeja. The Saurashtra player can take the most difficult catches, save critical boundaries with his athleticism, and inflict a run-out from wherever on the field, all of which are highly important in the shortest format.