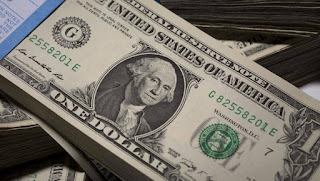 the U.S. on Monday dollar reached a fresh 20-year high versus a basket of currencies, benefiting from euro weakness in the midst of a deteriorating energy crisis, while investors were betting on additional Federal Reserve interest rate hikes.
The dollar index, which measures the value of the dollar relative to a basket of currencies, increased by as much as 0.5% to 110.03, its highest level since late 2002. Similar gains were made by U.S. dollar index futures.
On Monday, the dollar strengthened further against the euro after Russia shut down a significant gas pipeline to Europe, sparking worries about a serious power crisis in the region.
The euro lost 0.3% and last traded under $1.
Dollar strength also follows Friday's better-than-expected nonfarm payrolls report, which offers the Federal Reserve greater leeway to raise interest rates further.
Investors remained convinced that despite slower wage growth and an unexpected increase in unemployment, the relative tightness of the labor market would provide the central bank with sufficient motivation to hike rates significantly in September.
The probability that the Fed will increase rates by 75 basis points this month is 57%, according to traders. Four rate increases have been made by the central bank this year as it attempts to contain inflation that is at 40-year highs.
Jerome Powell, the chairman of the Federal Reserve, gave hawkish signals in August that signaled the Fed likely expected inflation to remain high for longer, which would likely lead to additional interest rate increases. The majority of Fed officials now predict that rates will conclude the year comfortably over 3%.
Rising interest rates in the US gradually placed pressure on most other currencies as the gap between U.S. and other yields decreased this year.
The euro and the Japanese yen are among the currencies that have been most adversely impacted by rising interest rates because their respective central banks have been unwilling to tighten policy.