Rafael Nadal and Iga Swiatek advance to the fourth round of the US Open in 2022 with commanding victory. 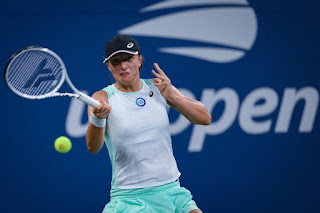 Since their first match as a junior, Nadal has defeated Frenchman Gasquet in 34 straight sets.
On Saturday, world number one Iga Swiatek made it to the round of 16 for the second year in a row as Rafael Nadal overcame close friend Richard Gasquet for the 18th time to advance to the fourth round of the US Open. With a 6-0, 6-1, 7-5 triumph, four-time winner Nadal extended his perfect 18-0 record over Gasquet and maintained his chances of winning a 23rd Grand Slam championship.
Since their first match as a junior, Nadal has defeated Frenchman Gasquet in 34 straight sets.
The 22nd seed Frances Tiafoe will be the next opponent for the Australian and French Open winners for a spot in the quarterfinals.
Nadal praised the American youngster, calling him "a fantastic player, very dynamic, and extremely fast."
Diego Schwartzman of Argentina was defeated by Tiafoe 7-6 (9/7), 6-4, 6-4, advancing him to the round of 16 for the third consecutive year.
The bloodied nose that Nadal, 36, sustained in the second round when he inadvertently hit his face with his racquet did not appear to bother him.
He jokingly said, "It's a little bit bigger than usual, but it's okay."
Alcaraz damages the shoe.
The presumed Grand Slam successor to Rafael Nadal, Carlos Alcaraz, won his 47th match of the season despite damaging one of his shoes.
The third-seeded player, who is 19 years old, overcame American Jenson Brooksby 6-3, 6-3, 6-3 on the strength of 46 winners.
In the middle of the match, Alcaraz, a quarterfinalist in 2021, managed to slip and damage one of his tennis shoes.
This is the third time I've done it. I do a lot of sliding, as you can see," he remarked.
Alcaraz will play 2014 champion Marin Cilic next. Cilic defeated Dan Evans of Great Britain with a total of 74 winners and 26 aces in a 7-6 (13/11), 6-7 (3/7), 6-2, 7-5 victory.
With a convincing 7-5, 6-4, 6-1 victory against Danish teenager Holger Rune, seventh-seeded Cameron Norrie of Great Britain advanced to the fourth round for the first time.
The ninth-seeded Russian Andrey Rublev, who defeated Canada's Denis Shapovalov with scores of 6-4, 2-6, 6-7 (3/7), 6-4, and 7-6 (10/7), awaits him next.
Fourth-round entry for top seed Iga Swiatek
Swiatek, the top seed in the world, defeated Lauren Davis 6-3, 6-4.
Swiatek defeated the American who had requested a medical timeout in the first set to have her blood pressure taken by rallying from 1-4 down in the second set to win five straight games.
To advance to the quarterfinals, the 21-year-old Pole must defeat either the Chinese adolescent Zheng Qinwen or the German player Jule Niemeier.
After saving two set points, Petra Kvitova defeated Garbine Muguruza, the ninth-seeded player.
After winning 5-7, 6-3, 7-6 (12/10), Kvitova will play American Jessica Pegula in the quarterfinals.
When the American legend saved five match points before being eliminated on Friday, Serena Williams, a two-time Wimbledon champion, said she was inspired by her.
The two-time US Open quarterfinalist Kvitova remarked, "I watched Serena and it was remarkable how she was preserving match points, so I wanted to do the same today."
With Muguruza's loss, her sixth in seven encounters with the Czech, only four of the top 10 women's seeds remained in the competition.
Sixth seed Aryna Sabalenka, who advanced to the 2021 semifinals, defeated French qualifier Clara Burel in just 68 minutes, 6-0, 6-2.
Yuan Yue, a Chinese qualifier, was defeated by Pegula, the eighth seed, 6-2, 6-7 (6/8), 6-0.
Victoria Azarenka, the three-time runner-up, defeated Petra Martic with ease (6-3, 6-0) to advance to the round of 16 where she will face 2016 finalist Karolina Pliskova, who defeated Olympic champion Belinda Bencic (5-7, 6-4, 6-3).