Why Russia affects gas prices in Europe and the United Kingdom 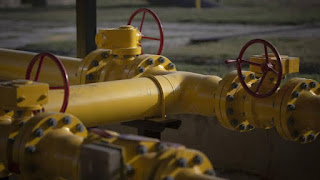 Reuters: London Russia said it had found a fault during maintenance, postponing until next Saturday the deadline for resuming flows through the Nord Stream 1 pipeline to Europe. This has made it more difficult for Europe to secure fuel for the winter. From August 31 to September 2, the Nord Stream 1 pipeline, which carries gas from Russia to Germany, was undergoing repair, which reduced flows to zero and raised concerns about a protracted supply interruption and additional hikes in European gas prices. Russia had already reduced the Nord Stream's flow rates to 20% of their maximum. While Europe claims that this is a pretext to decrease flows and use gas as a political weapon, an assertion that Russia rejects, Moscow claims that Western sanctions over the invasion of Ukraine are impeding equipment repairs. The gas markets in Europe, including those that do not directly rely on Russian gas, are affected in a number of ways, some of which are explained here. HOW MUCH GAS IS SUPPLIED BY RUSSIA? Europe has historically relied on Russia for about 40% of its natural gas needs; the majority of this gas is provided by pipelines such as Nord Stream 1, which travels straight to Germany, and Yamal, which passes Belarus and Poland to reach Germany. The internal gas markets of Europe are connected by a network of interconnected pipelines. Not all nations receive their gas directly from Russia, but if nations like Germany—the continent's largest consumer of Russian gas—receive less, they must fill the gap by importing gas from other nations, like Norway. This has an impact on the amount of gas that is available to other nations. Because of this, even though Britain normally imports less than 4% of its gas from Russia, variations in Russian supplies can lead to as much volatility in gas prices in Britain as in the rest of Europe. Less Russian supplies implies that Norway, its biggest source, may not have as much to offer. WHAT IS GOING ON RIGHT NOW? The first seven months of 2022 have already seen a decline in Russian gas exports to Europe, with flows across the three major pipeline routes falling by over 40% from the same period in 2021. GRAPHIC - Three major routes are used by Russian gas to travel to Europe each month. Since the beginning of the year, flows through the Yamal, which historically brought gas from Russia to Europe, have been flowing eastward from Germany to Poland. After Russia's invasion of Ukraine, which Moscow referred to as a "special military operation," flows through Nord Stream and via Ukraine, which were already lower than they had been the previous year, started to decline in March. After they all refused a Kremlin demand to switch to rouble payments, Moscow cut off gas supplies to Bulgaria, Finland, Poland, Danish supplier Orsted (OTC:DOGEF), Dutch company Gasterra, and Shell (LON:RDSa) for its German contracts this year. Numerous businesses, like Germany's Uniper and RWE and Italy's Eni, paid payments in accordance with Russia's new plan while still receiving gas. [nL8N2XN4VZ} However, a number of businesses, like Uniper and RWE, have since seen their supply reduced, with France's becoming the newest to hear from Gazprom (MCX:GAZP) that it will receive less gas on Tuesday. On Tuesday, France charged Moscow with using the availability of electricity as "a weapon of war." According to Energy Transition Minister Agnes Pannier-Runacher, the nation must be ready for the worst-case scenario of a total cessation of gas imports from Russia. Gas prices in Europe and the United Kingdom have increased as a result of the Nord Stream gas flow interruptions, reaching record highs last week in advance of the Aug. 31–Sept. 2 maintenance. Front-month gas costs in the UK and the Netherlands, graphic HOW ABOUT THE OTHER OPTIONS? By 2027, the European Union wants to stop relying on Russian fossil resources, therefore it has started looking for alternatives, such importing more international liquefied natural gas (LNG). According to Refinitiv data, European imports of LNG increased by about 56% in the first half of 2022 compared to the same period in 2021. This increase can be attributed to increased US capacity and higher prices in Europe drawing in more cargoes. However, Europe's capacity to import LNG is constrained, and supply worries increased after an accident forced the shutdown of a significant Freeport LNG export facility in the United States. Freeport announced last week that it had postponed the planned start-up of the plant, which can export up to 15 million tonnes annually (MTPA) and has been offline since June due to a fire, to late November from October. In March, full functionality is anticipated.